NEW PASSION: THE JOY OF CHILLI 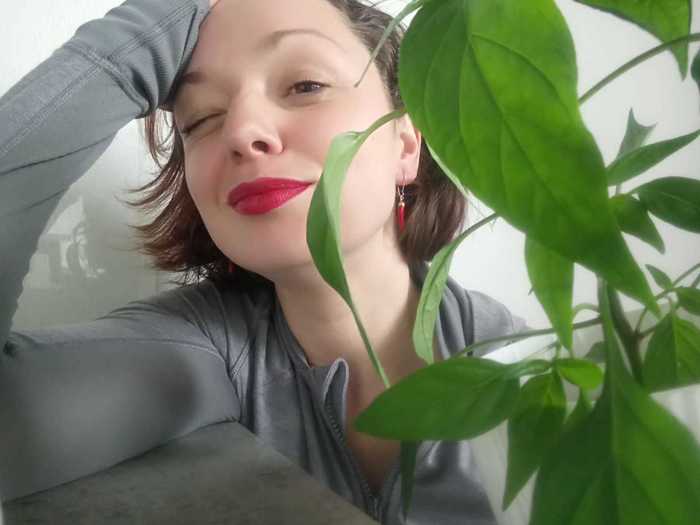 I want to tell you about my new passion, which was born very unexpectedly.

Every week I visit my parents’ house and I constantly admire chilli pepper while drinking coffee together in the kitchen. The chilli has been showing off its fruits for several years and loves to warm up in the sun on the windowsill. It is more like a pet, probably a dog! Well, at least that’s the energy I’m feeling coming out of it. The only difference is that you are the one running towards it and if you had a tail, oh, boy!!! Full of blossoms, greens, and red spicy peppers all year round. One little one cut in half and thrown into the soup makes your heartbeat faster, puts a smile on your face and a simple joy emerges: IT’S SO GOOD TO LIVE!

‘And that’s what I want too!’ - the red chilli in my handbag glowed with life carrying six seeds in it. I brought some soil, planted it, watered it, put the box in a plastic bag and just waited. If you would know how I circled that box every morning. Miss Impatience kept wanting to dig up the seeds and see if it already sprouted, did it yet???

And that every morning kept making me think that things take time. Dad said it would take up to three weeks for something tiny to appear.

Then I remembered Chinese bamboo, which stays underground for up to five years, and when it breaks through the soil it grows a meter a day!!! But it takes him up to five years to concentrate on its growth so nothing would catch up with it.

One morning I got up and saw something green and I was ‘flying’ all day from the fact that I’ll have a chilli-dog too. Over the course of the day, it turned out to be weeds and the mood went down at the same rate it had risen.

Lezione di vita: yes, when you put effort into something, do not be surprised that the first fruits of your work won’t be what you expected. So have some patience, breathe in some positivity and fake it till you make it.

In the end, five out of the six seeds broke through. When the sun goes up, the pepper grows quickly, but for fruits, we will have to wait until autumn. Now they drink coffee (water) with me every morning, warm up in the rays of the sun and look out the window. By the way, they all have names: Jack Blue, Lucifer Morning Star, Kim Chilli, and so on. A few have already settled in friends’ homes and we don’t know what will come out of it. But it’ll definitely be something nice.

Do you know why people love chilis?

THEY LOVE THE BURN!

And yet, according to legends, they attract HAPPINESS to your home.

When I found this little stone, broken into three pieces it seemed so meaningful. Three parts somehow representing the past, the present, and the future. Reminded me of the few first years spent in China. Three is considered a good... Continue →